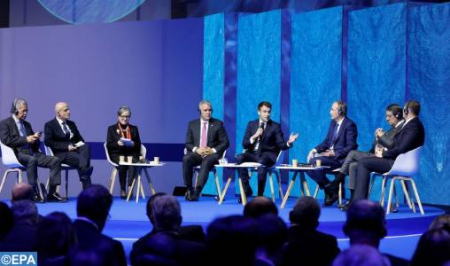 A Coalition on Biodiversity Beyond National Jurisdiction (BBNJ) calling for the adoption of an ambitious treaty for the conservation and sustainable use of marine biodiversity in areas beyond national jurisdiction, has been launched Friday at the One Ocean Summit. The announcement was made by the French President Emmanuel Macron and the President of European Commission, Ursula von der Leyen, at the opening of the high-level segment of this international summit. This coalition includes the 27 member states of the European Union and 13 other countries, including Morocco. “The Coalition is calling for the adoption, still this year, of an ambitious treaty for the conservation and sustainable use of marine biodiversity in areas beyond national jurisdiction”, the President of the European Commission said. “We need an international agreement, a legally binding instrument that would sustainably govern the high seas. We are so close, but we need to push”, she stressed. The initiative is supported by Morocco, Australia, Canada, Chile, Comoros, India, Monaco, Norway, Peru, the Republic of Congo, Singapore, Switzerland and the United Kingdom, Emmanuel Macron said. It is a matter of “concluding these exchanges and moving forward to finally have the tools to protect these international waters which are too often an ecological lawless zone,” the French president said. This high ambition coalition gathers parties which are committed, at the highest political level, to achieve an ambitious outcome of the ongoing negotiations on a Treaty of the High Seas (“the implementing agreement on Biodiversity Beyond National Jurisdiction”), that has been formally negotiated under the auspices of the United Nations since 2018, but the discussions were interrupted by the Covid-19 outbreak. The negotiations have been staggered into four sessions, with the fourth session being currently scheduled for March 2022. The ‘BBNJ Treaty’, also known as the ‘Treaty of the High Seas’, is a new instrument being developed within the framework of the United Convention on the Law of the Sea (UNCLOS), the main international agreement governing human activities at sea. It will achieve a more holistic management of high seas activities, which should better balance the conservation and sustainable use of marine resources. The negotiations are centered on a package of elements agreed upon by the General Assembly in 2015 namely the conservation and sustainable use of marine biological diversity of areas beyond national jurisdiction, in particular, together and as a whole, marine genetic resources, including questions on the sharing of benefits area-based management tools, including marine protected areas, environmental impact assessments, capacity-building and the transfer of marine technology. During a panel entitled “protect and restore marine ecosystems and promote sustainable fisheries”, as part of the High-level Segment of the One Ocean Summit, the Head of Government Aziz Akhannouch, who represents Morocco at this major international event, said that the international instrument for the conservation and use of biodiversity beyond national jurisdictions on the high seas, mentioned by the French President, is fundamental because it “can directly impact countries”.