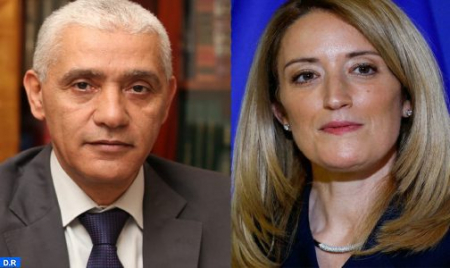 Speaker of the House of Representatives (Lower House), Rachid Talbi Alami, recently held a telephone conversation with the President of the European Parliament, Roberta Metsola, which focused on strengthening dialogue and consultations between the two parliamentary institutions and the Euro-Moroccan partnership. On this occasion, the two sides stressed the depth of friendship and cooperation between the Kingdom of Morocco and the European Union, said a statement by the Lower House. They also discussed various issues of common parliamentary interest and ways to intensify coordination in this area, particularly with regard to the European Neighborhood Policy and common challenges related to migration, climate change, renewable energy, human development, security and the fight against terrorism as well as economic and trade cooperation, according to the statement. On the geostrategic level, Talbi Alami and Metsola discussed the Mediterranean dimension and relations between the EU, Morocco and Africa, in the context of the very high importance that His Majesty King Mohammed VI gives to the African continent. In addition, the two officials also discussed the revitalization of the action of the Morocco-EU Joint Parliamentary Committee, which is a real mechanism for permanent political dialogue and the strengthening efforts of the two parliamentary institutions in the organization of the next EU-Africa Parliamentary Forum, in accordance with the High Royal Orientations. To face the challenges of the Mediterranean region, the two officials, who are also members of the Bureau of the Parliamentary Assembly of the Union for the Mediterranean, underlined the importance of giving more dynamism to the work of the Assembly, which requires constant coordination and intense efforts, according to the same source. Talbi Alami told Metsola that he will present, during his next visit to the European Parliament, the priorities of the Moroccan presidency of the Parliamentary Assembly of the Union for the Mediterranean, as well as the progress of the development and implementation of the financing agreement of parliamentary twinning between the House of Representatives and the EU.