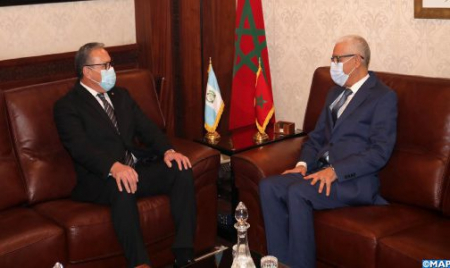 The Speaker of the House of Representatives (lower house), Rachid Talbi Alami, held talks on Tuesday with the Ambassador of the Republic of Guatemala in Rabat, Erick Estuardo Escobedo Ayala, focusing on ways to strengthen parliamentary cooperation on bilateral and multilateral levels. At the beginning of this meeting, Ayala congratulated Talbi Alami for his election as Speaker of the House of Representatives, praising the excellent historical, political and diplomatic 50-year-old relations between the two countries, according to a statement of the Moroccan parliament’s lower house. The Guatemalan diplomat also expressed his appreciation and consideration for HM King Mohammed VI’s wisdom and high guidance and for the measures taken to limit the impact of the COVID-19, praising the Moroccan experience in several areas that have made the Kingdom “a model to follow.” Ayala said, moreover, that his country aspires to strengthen its economic and trade relations with Morocco, to promote coordination and exchange of expertise and experience around issues of common interest, such as security, health, climate change, renewable energy and digital transformation. He also described parliamentary relations between Morocco and Guatemala as “distinguished”, adding that his country aims to consolidate them bilaterally and multilaterally, through the exchange of visits, friendship groups and coordination within various parliamentary forums. For his part, Talbi Alami welcomed the distinguished level of relations between the two countries, as well as the support of Guatemala to the UN process and the autonomy initiative as a realistic and acceptable political solution to end the artificial conflict around the southern provinces of the Kingdom. The Speaker of the House of Representatives also emphasized the excellence of parliamentary relations between Morocco and Guatemala on bilateral and multilateral levels, highlighting the visit he made in May 2016 to the Guatemalan Congress on the occasion of his participation in the session of the Central American Parliament (Parlacen), marked by the signing of a cooperation agreement between the two legislative institutions. During his meeting with the Guatemalan official, Talbi Alami reiterated the openness of Morocco’s House of Representatives to all constructive initiatives and parliamentary issues of common interest. In this regard, he expressed his wish to institutionalize these relations through regional parliamentary forums, the convergence of views and positions on priorities on the parliamentary level and the establishment of new spaces to strengthen South-South parliamentary cooperation.