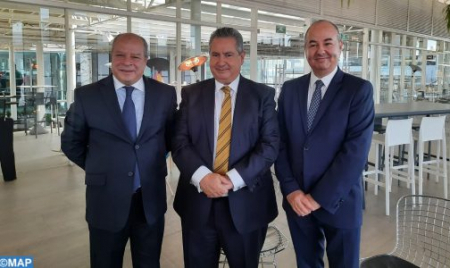 Morocco’s ambassador to Mexico, Abdelfattah Lebbar, has highlighted, in an interview to a Mexican channel, the sustained development of bilateral relations in various fields. Lebbar, who was the guest at the end of the week of the news channel “ADN40”, stressed the excellent level of relations between Morocco and Mexico, recalling that the Kingdom is the first Arab partner and the second of the African continent of this country in terms of trade. In this regard, the diplomat invited Mexico to review its position on the national cause to give an even stronger impetus to a relationship based on mutual trust that can open new prospects for bilateral cooperation. Lebbar, who was on the set of the Mexican channel with the Israeli ambassador in Mexico City, Zvi Tal, on the occasion of the commemoration of the first anniversary of the resumption of relations between Rabat and Tel Aviv, took the opportunity to give an overview of the history of Judaism in Morocco, and the coexistence between Jews and Muslims that has always distinguished the Moroccan society. Relations between Morocco and Israel are based on a thousand-year-old history, in addition to the presence of a large Jewish community of Moroccan origin in Israel that has never cut ties with the land and traditions of its forefathers, stressed the ambassador. The preservation of the special relationship between Jews and Muslims in Morocco enjoys the high solicitude of HM King Mohammed VI, he noted, noting that the Kingdom is the only Arab country where the Jewish community has its own civil code and where Jewish history and culture are part of the school curriculum. For his part, the Israeli ambassador to Mexico said that the relations of his country with Morocco are a reference in the Arab world, especially since they are based on the presence of a large community of Moroccan origin in Israel, which remains closely attached to the customs and land of their ancestors. The Israeli ambassador also welcomed the comprehensive development of cooperation ties between the two countries over the past year.