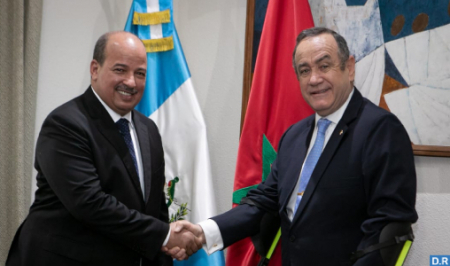 Speaker of the House of Advisors, Naama Mayara was received in audience by President of the Republic of Guatemala, Alejandro Giammattei. During this meeting which took place Tuesday at the headquarters of the Presidential Palace in Guatemala City, Mayara conveyed to the Guatemalan Head of State the greetings of His Majesty King Mohammed VI and His wishes of success and prosperity to the friendly Guatemalan people. Giammattei expressed the high regard he has for the Kingdom of Morocco under the wise leadership of His Majesty King Mohammed VI. He reiterated the constant position of the Republic of Guatemala on the issue of the territorial integrity of the Kingdom, stressing that this support governs the positions of Guatemala in all regional and international fora. Giammattei also expressed the firm commitment of his country to raise economic cooperation and trade with Morocco in all areas to the level of the solid political relations that unite the two countries. This audience was held in the presence of the Moroccan ambassador to Guatemala, Tarik Louajri and the parliamentary adviser, Ahmed Lakhrif.