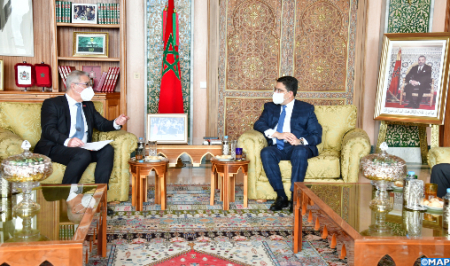 The means to strengthen economic relations between Morocco and Malta were the focus of a meeting held Tuesday in Rabat between the Moroccan minister of Foreign Affairs, African Cooperation and Moroccans Abroad, Nasser Bourita, and his Maltese counterpart, Evarist Bartolo. To this end, the two countries agreed on the creation of a common economic mechanism to boost their economic cooperation and strengthen their consular relations, while expressing the wish to strengthen their economic relations and strengthen their cooperation in all areas of common interest, said Mr. Bourita during a press briefing at the end of these talks. The two sides also seized this opportunity to welcome the imminent opening of a Maltese consulate of an economic nature in Casablanca, he pointed out, noting that the visit to Morocco of the Maltese top diplomat takes part in the the wake of a positive dynamic experienced by bilateral relations in recent years and falls within the framework of political consultations on several issues of common interest. Mr. Bourita also highlighted the convergence of views between Morocco and Malta on various international issues, welcoming Malta’s role as well as its support for the Kingdom in its relations with the European Union. The minister expressed Morocco’s support for Malta’s candidacy for non-permanent UN Security Council seat give its role in bringing together positions and points of view of the various actors and its presence on the international scene. For his part, Mr. Bartolo said that Morocco and the Republic of Malta enjoy relations that go back to nearly fifty years, stressing the need to further develop economic relations with the opening of a consulate in Casablanca. “There are areas where we can work together, especially in the post-COVID era, during which regionalization will be strengthened,” he said, noting that Morocco plays a very important role in this area. “We have a strong community of Moroccans in Malta”, said Mr Bartolo, noting that his country has great experience in the pharmaceutical industry sector, an area “where we can certainly work together” and “share our experience”.