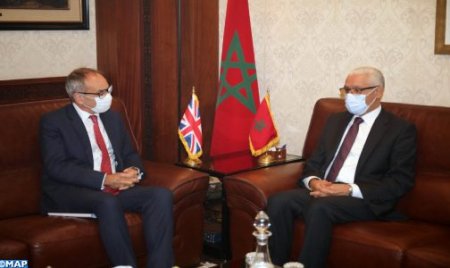 The UK ambassador in Rabat, Simon Martin, on Tuesday welcomed the “historic” and “constantly evolving” relations between his country and the Kingdom of Morocco. During a meeting with the Speaker of the House of Representatives (lower house), Rachid Talbi El Alami, Martin also praised the “distinguished” bilateral cooperation in various fields. In this respect, he stressed that the two countries share “the same interests and values relating to respect for the sovereignty and territorial integrity of States,” said a statement from the Moroccan parliament’s lower house. The diplomat also highlighted the Moroccan-British parliamentary relations and the privileged partnership between the House of Representatives and the Westminster Foundation for Democracy. In addition, he recalled that the British House of Commons has created the Moroccan-British Parliamentary Friendship Group, whose members aspire to work with their counterparts at the House of Representatives so as to contribute to the consolidation of rapprochement between the two countries. For his part, Talbi El Alami welcomed the level of Moroccan-British parliamentary relations, as well as the partnership program with the Westminster Foundation for Democracy, emphasizing the importance of the exchange of experiences and expertise in the field of parliamentary action, the statement added. The Speaker of the House of Representatives also expressed the firm determination to inject a new dynamic to the action of the parliamentary friendship group in the two countries, especially since “there are many issues of great importance to both parties.” He stressed that Morocco remains a pole of peace and stability, noting that the legislative institution contributes at the parliamentary level to the consecration of the values of democracy, coexistence, dialogue and acceptance of the other. Talbi Alami has, in the same context, given an overview of the “Children’s Parliament” and the various initiatives to open to youth, women and all society segments. During this meeting, Talbi El Alami extended an invitation to the Speaker of the British House of Commons to pay a working visit to Morocco, which will be an opportunity to discuss ways to step up bilateral parliamentary relations.