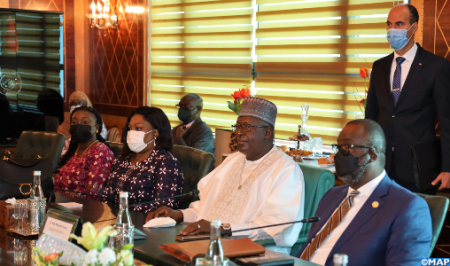 The Speaker of the Parliament of the Economic Community of West African States (ECOWAS), Sidie Mohamed Tunis, commended Morocco’s initiatives in the field of investment in Africa. During talks with the Speaker of the House of Advisors (upper house), Naama Mayara, Mr. Tunis praised “the good initiatives undertaken by the Kingdom of Morocco with regard to the African continent in the field of investments”, calling to seize all the economic opportunities available to both sides in various promising sectors, said a press release from the Upper House. He stressed that the ECOWAS parliament will work together with the Moroccan parliament to raise their relationship to the level of a strategic partnership for the benefit of the peoples of the region. For his part, Mr. Mayara underlined the capital importance of the visit of the African official within the framework of the consolidation of the relations of cooperation between the Kingdom and the ECOWAS countries, which are based on cultural, spiritual and civilizational ties and the values ​​of solidarity, mutual respect and common struggle for independence and the consolidation of peace and stability on the African continent, the statement added. Over the past few years, these historic relations have gained great momentum thanks to the visits that HM King Mohammed VI has paid to several African countries, which led to the signing of more than 600 cooperation agreements within the framework of a win-win partnership and renewed South-South cooperation, underlined Mr. Mayara. In this regard, the Speaker of the House of Advisors expressed Morocco’s desire to strengthen its presence within ECOWAS, so as to enable it to continue its constructive efforts to address the challenges and threats facing the region, in particular achieving the structural transformation required for the economies of African countries with the aim of laying the foundations for sustainable development and promoting the security and stability of the continent. He also expressed his full conviction of the need to support the dynamics characterizing relations between the two parties through joint parliamentary action as well as parliamentary diplomacy which offers significant opportunities for strengthening this cooperation, in addition to the unification of positions on bilateral and regional issues and the effective contribution to the promotion of economic, commercial and cultural relations.