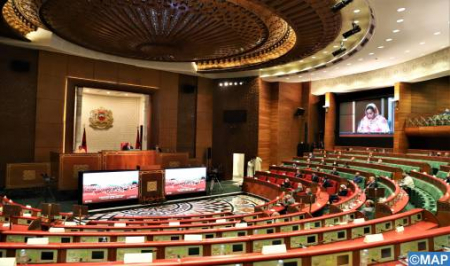 Participants in the sixth Parliamentary Forum on Social Justice, which wrapped up Monday evening, were unanimous in stressing the importance of adopting an advanced vision of social dialogue to meet the challenges of the social state. In their final statement, issued at the end of the Forum organized by the House of Advisors under the patronage of His Majesty King Mohammed VI, participants stressed the centrality of social dialogue to overcome the difficulties and constraints that can prevent the achievement of the expected goals, adding that social dialogue is the sine qua non for the establishment of fair and balanced labor and social relations. They also affirmed that the achievement of this objective, in its social, economic and political dimensions, is a shared responsibility between the state, with its legal system and administrative structures, the elected bodies at national and local levels, the economic and social partners, and the actors of civil society. The Parliamentary Forum also called for the adoption of a methodical, effective and alternative approach, based on the renewal of the bases and mechanisms of social dialogue, as a prelude to achieving the goal of building the social state, while stressing the central and direct responsibility of the parties to the tripartite social dialogue to pave the way for balanced social relations. It also urged the parties to the social dialogue, including the political, economic and social elites, to accept concessions and develop innovative solutions, in favor of social peace, the preservation of the productive capacities of enterprises on the one hand, and the rights and vital interests of the working class on the other. In this regard, the Sixth Parliamentary Forum on Social Justice welcomed the importance of involving the active forces of civil society, which are known for their dynamism, efficiency and effective contribution, as a force of proposal capable of providing adequate solutions to maintain the balance of labor relations. The Forum proposed, on the other hand, a certain number of procedural and practical recommendations likely to give a strong impulse to a social dialogue open to the actors of the civil society and which reflects the concerns of development.