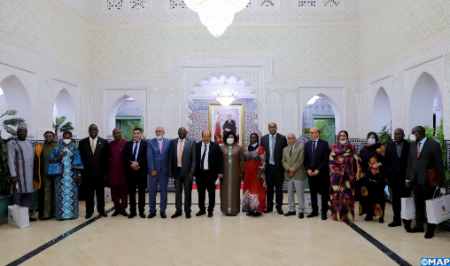 The House of Advisors (upper house) and the parliament of the Economic Community of West African States (ECOWAS) signed, on Wednesday, the “Laayoune Declaration”. This document was initialled by the Speaker of the Upper House, Naama Mayara, and the Speaker of the ECOWAS Parliament, Sidie Mohamed Tunis, on the sidelines of a visit by a large delegation from this legislative institution of the organization of the Economic Community of West African States to the capital of the Moroccan Sahara. The signing ceremony took place in the presence of the Wali of the Laayoune-Sakia El Hamra region, governor of the province of Laayoune, Abdeslam Bekrate, the president of the regional council, Sidi Hamdi Ould Errachid, in addition to elected officials. During their stay in Laayoune, the members of the ECOWAS delegation paid visits to the region’s flagship projects, including the sports city and the Olympic hall sites, which are carried out according to the best international standards. They also visited the construction sites of the Faculty of Medicine and Pharmacy, the “Cité des Métiers et des Compétences”, the University Hospital Center, as well as other projects aimed at strengthening the city’s infrastructure.