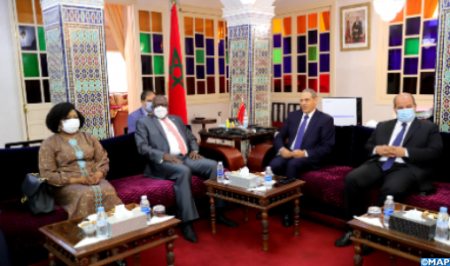 The Speaker of the Parliament of the Economic Community of West African States (ECOWAS), Sidie Mohamed Tunis, welcomed, Wednesday in Laayoune, the socio-economic development process in the Moroccan Sahara. “We are very satisfied with what we have seen here in Laayoune. I am very happy that the population is at the center of all development initiatives in this region,” Tunis, who heads a delegation of the ECOWAS parliament on a visit to Morocco, told reporters.  He stressed that this trip to Laayoune aims to see firsthand the socio-economic progress that the region is experiencing, voicing the will of the ECOWAS parliament to further promote its cooperation with the legislative institution in Morocco. For his part, Ibrahima Mémounatou, member of the delegation, welcomed the adoption of the gender approach in the development and implementation of development projects in the region. “The delegation is impressed by the development model in the region and the way women are taken into account in the development system”, she pointed out, adding that the members of the ECOWAS delegation noted the involvement of the population of the southern provinces of the Kingdom in this dynamic and the management of their local affairs. For his part, the Speaker of the House of Advisors, Naama Mayara, said that this visit enabled the ECOWAS delegation to learn closely about the socio-economic development in the southern provinces of the Kingdom. This kind of visit is the concretization of the strategic choices adopted by Morocco in terms of strengthening multidimensional relations with its African depth and promoting South-South cooperation, he pointed out, emphasizing the concern to give a strong impetus to relations between the parliament and the pan-African organizations. The Speaker also noted that this visit will have a positive impact on the vision of the members of the ECOWAS Parliament regarding the progress made in the Moroccan Sahara, in particular, and in all the regions of the Kingdom. This trip provides the opportunity to highlight the flagship projects carried out in the sectors of infrastructure, education, health, sports and culture, thanks to the development model for the southern provinces launched in 2015 by HM King Mohammed VI, underlined for his part the President of the Regional Council of Laayoune-Sakia El Hamra, Sidi Hamdi Ould Errachid. During talks with the ECOWAS delegation, emphasis was also placed on the importance of promoting the exchange of expertise and experience between African States in terms of local management and governance to achieve the expected development, he said. The members of the ECOWAS delegation paid a visit to the Laayoune Sports City, to the construction sites of the Olympic hall and the covered hall, which are built according to the best international standards. They also visited the construction sites of the Faculty of Medicine and Pharmacy, the “Cité des Métiers et des Compétences”, the University Hospital Center, as well as other projects aimed at strengthening the city’s infrastructure. The delegation had talks with the wali of the Laayoune-Sakia El Hamra region, governor of the province of Laayoune, Abdeslam Bekrate, as well as with chioukhs and notables of Sahrawi tribes.