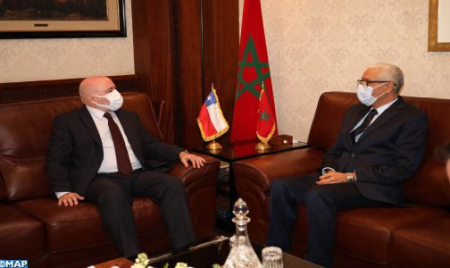 Speaker of the House of Representatives (lower house), Rachid Talbi El Alami, on Wednesday held talks in Rabat with the Chilean ambassador to Morocco, Rafael Puelma Claro, which focused on the means to develop and expand parliamentary cooperation between the two countries. During these talks, the Chilean diplomat praised the achievements made by Morocco as well as the Kingdom’s leadership in many areas, said a statement from the House of Representatives. He also highlighted the solid parliamentary relations between the two countries at the bilateral and multilateral levels, expressing his country’s will to strengthen these ties in the economic and commercial areas. The ambassador stressed that there are several issues of common interest between the two nations, including renewable energies and climate change. Moroccan and Chilean MPs can play a major role in strengthening communication and dialogue and institutionalizing continuous coordination, he pointed out. For his part, Mr. Talbi El Alami welcomed the distinguished level of Moroccan-Chilean relations, characterized by mutual understanding and the preservation of the bilateral political achievements made, as well as the desire to build strategic relations that clearly reflect the depth of the historical relations between the two countries. He also commended the quality of bilateral and multilateral Moroccan-Chilean parliamentary relations, noting that the House of Representatives is open to all constructive initiatives and parliamentary issues of common interest, such as climate change, renewable energies and technological development. The Speaker voiced the wish to raise Moroccan-Chilean parliamentary relations at the bilateral and multilateral levels to higher and deeper levels, to unify visions and positions on common parliamentary issues and to create new bilateral and regional cooperation spaces.