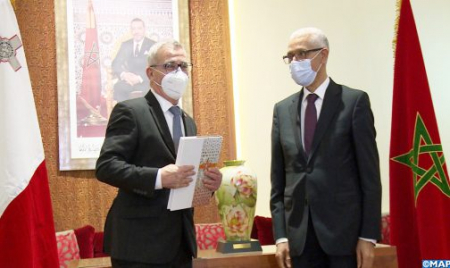 Speaker of the House of Representatives, Rachid Talbi Alami, held talks on Tuesday in Rabat with the Maltese Minister of Foreign and European Affairs, Evarist Bartolo. The talks focused on ways to strengthen bilateral cooperation, especially in the parliamentary field, as well as regional and international issues of common interest, said a statement by the lower house. On this occasion, Talbi Alami welcomed the excellent relations between the two countries and the two friendly peoples, noting that the House of Representatives has undertaken, after the parliamentary elections of 2021, the formation of parliamentary friendship groups with several countries including Malta, which will give new impetus to bilateral parliamentary cooperation. He also called for strengthening cooperation between the two countries in the framework of the Parliamentary Assembly of the Mediterranean to be chaired by Morocco and working together to address the challenges facing the Mediterranean region, including issues related to security, peace, migration, climate change and water and food security. In addition, Talbi Alami reiterated his thanks to the Minister of Foreign and European Affairs of Malta for the position of his country on the issue of the Moroccan Sahara and its commitment to international legality and respect for the resolutions of the United Nations relating thereto, the same source added. For his part, Evarist Bartolo expressed his determination to work to strengthen bilateral cooperation relations, especially in the parliamentary field, emphasizing the important role that parliamentary diplomacy plays in promoting and consolidating the ties of cooperation and friendship between the two countries and strengthening the dialogue and permanent communication, concluded the statement.