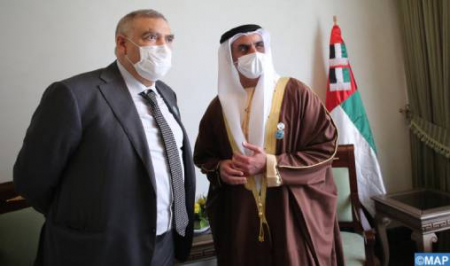 Minister of Interior, Abdelouafi Laftit, met, Wednesday in Tunis, with His Highness Sheikh Saif Bin Zayed Al Nahyan, Deputy Prime Minister of the United Arab Emirates, Minister of Interior. The meeting, which took place on the sidelines of the 39th session of the Council of Arab Ministers of Interior, focused on ways to strengthen cooperation between the two countries. The two sides also reviewed issues of common interest, highlighting the excellent relations between the two countries. Laftit leads the delegation of the Kingdom to this session, which includes Idriss Jouhari, wali director general of Internal Affairs and Mohamed Moufakir, wali director of international cooperation at the Ministry of Interior, as well as Mohamed Dkhissi, prefect, central director of the judicial police at the Directorate General of National Security (DGSN), director of Interpol-Morocco and director of the Liaison Office at the General Secretariat of the Council of Arab Ministers of the Interior.