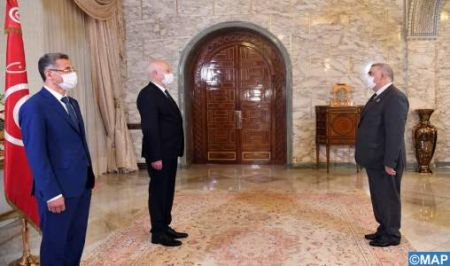 Tunisian President, Kaïs Saïed received, Wednesday at the Carthage Palace in Tunis, Minister of Interior, Abdelouafi Laftit as part of a delegation including participants in the 39th session of the Council of Arab Interior Ministers. The Minister of the Interior, Abdelouafi Laftit leads the Moroccan delegation to the work of this session, which includes Idriss Jouhari, wali director general of Internal Affairs and Mohamed Moufakir, wali director of international cooperation at the Ministry of Interior, as well as Mohamed Dkhissi, prefect, central director of the judicial police at the Directorate General of National Security (DGSN), director of Interpol-Morocco and director of the liaison office at the general secretariat of the Council of Arab Interior Ministers. This meeting, held in the presence of delegations representing the Arab League, Interpol, the Arab Maghreb Union and the European Union, as well as the Naif Arab University for Security Sciences, discussed several issues related to inter-Arab security cooperation in the face of security challenges.