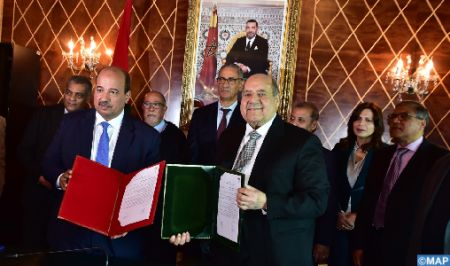 Speaker of the House of Advisors, Naama Mayara, held on Tuesday in Rabat, talks with speaker of the Egyptian Senate, Abdel-Wahab Abdel-Razek, focused on strengthening the means of consultation, coordination and promotion of joint parliamentary action. This meeting provided an opportunity for both parties to reiterate their pride in the level of distinguished relations between Morocco and Egypt, based on mutual esteem and respect, and which draw their strength from the deep historical ties uniting the Moroccan and Egyptian peoples, under the wise leadership of HM King Mohammed VI and President Abdel Fattah Al-Sissi, said a statement by the House of Advisors. In this regard, Mayara highlighted the willingness of Morocco to develop relations between the two countries and deepen the process of coordination and consultation on all bilateral, regional and international issues. He also stressed the need to work to raise these relations to the level of strategic partnership to which both countries aspire, especially in the economic and commercial fields. Mayara also expressed the willingness of the upper house to make an effective contribution, by its constitutional place, to consolidate these relations and give the parliamentary dimension the place it deserves, through the strengthening of joint parliamentary action, consolidating the role of cooperation and friendship groups by establishing them as an effective and sustainable link between the legislative institutions of the two countries, while intensifying coordination and consultation at various international forums to serve common interests. In this regard, Mayara welcomed the signing of the protocol of cooperation, concluded on this occasion by the two institutions in order to further boost relations of cooperation and partnership between them. The speaker of the Egyptian Senate, currently on a working visit to Morocco, welcomed the strength of relations between the two countries, calling for the exchange of experiences on various issues of common interest, such as the environment, women and human rights. Abdel-Razek also praised the parliamentary relations between the legislative institutions of the two countries, inviting Mayara to make a working visit to Egypt as soon as possible, in order to continue the parliamentary dialogue within the framework of the growing dynamism in relations between the two brotherly countries.