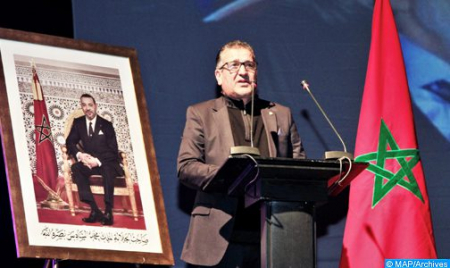 The press comments on the war in Ukraine unearth a distressing discrimination for they are based on dress code, eurocentrism and ethnic affiliations, writes Abdelhamid Jmahri, editor of the Arabic Daily ”Al Itihad Al Ichtiraki”. In an editorial entitled ”Racists, the War in Ukraine and the Ideal Migrant”, published Wednesday, he notes that ”comments on the war between Kyiv and Moscow are discriminatory in their biased approach which differentiates Ukrainian immigrants from those of other countries, diregarding the fact that they are also fleeing the war zone”. In this vein, the writer decries this “approach based on dress code, the geographical belonging to Europe and race. An approach made as normally as possible into a rule”. ”Because they (Ukrainians) look like Westerners and we don’t, being foreigners linguistically and also in laughter, hunger pangs and facial features! Their families are identical to Europeans and we are not. They come in cars and buses like those of the Europeans, whereas we hail like a rain that suddenly falls, a torrent or even a storm with waves and boats that do not look like those that sail through the rivers of Vienna or Venice,” he writes. Faced with this, and with this devastating war in Ukraine, the columnist says that all he feels is anger tinged with derision, adding that every time a shell falls in Kiev, the Europeans are unleashed against the other peoples, mainly the Arabs, the Amazighs, the Africans, the Asians, the Kurds and the Yazidis. As proof, he notes that ”Iskander’s missiles not only blow up destructible buildings but also exacerbate destructive behaviors which are potentially in favor today of political construction in the West”. He points out that Western journalists “are striving in an unprecedented approach to dissociate Ukrainian migrants from other nationalities, which reveals an untold denigration and an immoral categorization based on gender, race and religion”, believing that ”this war has given the Western media the opportunity to make a demarcation between intramural European immigration and extra-European immigration, with no regard for the Syrians, Iraqis and Yemenis who fled the war just like Ukrainians today. ”Because, each war has its conveniences, as is the case for racists for whom Ukrainians are civilized, educated migrants and are part of Europe and when they move to France or the Netherlands, they only temporarily leave the same civilizational space since they are perpetually present in the immeasurable western civilizational time. While African migrants are vilified, unable to assert themselves as victims of coups, of shameless exploitation of their resources by Western civilization and greediness that has darkened their future after burying the past of their parents,” he continues. During this time, he adds, ”We, Africans, Iraqis, Syrians, Algerians and Tunisians, lay foot on their turf, naked and seen as primitives, and die in the oceans of Western countries which do not display the slightest feeling of shame and remorse for the abuses they perpetrated in the countries of these migrants”. ”It is in this case a gangrenous elite which seeks to find a way out of a serious error which is war and an unbearable fatality which is immigration by committing an even more unforgivable error which is racism”, he argues, adding that ”Europe, through its tendentious media, has only one desire: welcoming migrants of European origin on its soil and not accepting that strangers die on its territory for that the funeral takes place in a civilized setting of its own while the others, the foreigners, will only have the right to a funeral in the depths of the Mediterranean and the Red Sea”. Jamhri believes that we are witnessing an appalling prolonged war, stoked by racists for whom it is not only a matter of an all-out economic and financial war against Russia but above all an opportunity to wage a war on the unwanted foreign migrant who has missed the opportunity, while being shot and starving, to assert that he deserves to live in Europe with all that this entails in terms of ‘elegance, physiognomy, language and proximity”. And despite everything, he quips, “their complex in their subconscious lies in the fact that while opening their arms to welcome those who look like them, they do not have the guts to sacrifice their lives to defend them”, adding that ”this is the complex of the cowardly racist who can only assert himself under the cover of democracy in the fields of the media, politics and in the public space”. He estimates that ”European humanity, which cares about the fate of the earth and the peoples who live there, should not ignore that this quest for the ideal migrant is a regression to the time of eugenics which singled out individuals according to their genetic heritage and eliminated those who did not fit into a predefined selection framework according to civilizational and ethnic norms. A boon for the racists who plunges us back into Nazism”. That being said, Abelhamid Jmahri thinks that ”this European elite surrendered easily to the siren calls of State racism”.