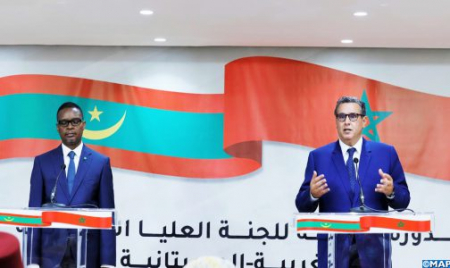 Morocco and Mauritania expressed, on Friday in Rabat, their convergence of views in terms of political consultation on a set of regional and international issues of common interest. On the occasion of the eighth session of the Moroccan-Mauritanian High Joint Commission, the two parties voiced the convergence of their views on several issues, including the Maghreb region, joint Arab action, the Palestinian cause, the conflicts in Libya, Yemen and Syria, the Sahel and Sahara region, and development in the African continent. The two sides also expressed their satisfaction with the significant development of relations between the two countries over the past few years, in accordance with the enlightened guidelines of the Heads of State of the two countries, His Majesty King Mohammed VI and His Excellency President Mohamed Ould Cheikh El Ghazouani. The two sides also agreed on several axes with a view to developing, broadening and diversifying the areas of bilateral cooperation. At the level of sectoral cooperation, the Moroccan-Mauritanian High Commission reviewed the aspects of cooperation in several economic, cultural, educational and technical fields, welcoming the results recorded in this regard. It also examined ways to strengthen bilateral cooperation mechanisms in priority sectors for the two countries, and made a number of recommendations and suggestions to this effect.