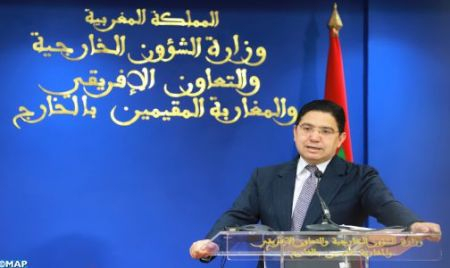 “Morocco and the Philippines will coordinate to defend their territorial integrity and fight separatist and extremist groups wherever they are,” said Thursday in Rabat, the Minister of Foreign Affairs, African Cooperation and Moroccans Abroad, Nasser Bourita. Bourita, who was speaking at a joint press briefing with his Filipino counterpart, Teodoro Locsin Jr. said that Morocco and the Philippines share a convergent vision on the need to have strong countries to meet the economic, security and environmental challenges facing the world today, noting that the two countries will coordinate to defend their territorial integrity and fight against separatist and terrorist groups. The fight against separatism and support for the territorial integrity of states is a fundamental issue for which the international community must mobilize, he stressed, adding that the world today needs strong states that preserve their territorial integrity and national sovereignty. Pointing to a great rapprochement between separatist groups and terrorists in the world and in the region, Bourita called on the international community to be more aware of this mutation that separatist groups are experiencing and to face the inherent challenges in a strong and coordinated way. Morocco and the Philippines agreed to coordinate their positions in regional and international organizations to fight against the rapprochement between separatism and terrorism, as well as to confront the attempts of countries whose “core business” is to undermine stability by encouraging and harboring terrorist and separatist groups. Bourita also welcomed the position of the Philippines supporting the territorial integrity of the Kingdom, underlying, in this regard, that Morocco perceives in the same way the issues of territorial integrity and national sovereignty of all countries, including that of the Philippines, which have the right to defend its territorial integrity and national sovereignty against any separatist attempt. On the other hand, he stressed that the visit of the Filipino minister has a historic character, being the first of its kind at the bilateral level since the establishment of diplomatic relations between Morocco and the Philippines, adding that this visit comes within the framework of the vision of HM King Mohammed VI for the diversification of the Kingdom’s partnerships and access to diversified and different spaces. In this regard, Bourita noted that this country is a major element in Southeast Asia and can, therefore, stand as a strong partner of Morocco in this region. This visit has allowed the two countries to reach consensus at several levels, he stressed, stressing that the mechanisms of cooperation and political consultation will be activated regularly throughout the year to coordinate positions on many regional and international issues. It was agreed to develop economic relations especially with the wide opportunities that the two countries open for each other in their respective regions, he highlighted, explaining that the Philippines can be a gateway for Morocco to a strong presence in the framework of the Kingdom’s advanced ties with the the Association of Southeast Asian States (ASEAN), just as Morocco can serve as a gateway for a sustained economic presence of the Philippines in Africa. Strong partnerships between states depend less on geographical proximity than on sharing the same values and interests as well as the same vision towards the world, Bourita stressed, affirming that Morocco and this Asian country can rely on each other. Minister of Foreign Affairs, African Cooperation and Moroccans Abroad, Nasser Bourita, co-chaired, Thursday in Rabat, with Philippine Secretary of Foreign Affairs, Teodoro Locsin Jr. the 2nd session of Morocco-Philippines Political Consultations. The Philippine embassy was inaugurated during a ceremony held Thursday in Rabat, in the presence of the Philippine Secretary of Foreign Affairs and the ambassador, director general of bilateral relations at the Ministry of Foreign Affairs, African Cooperation and Moroccans Abroad, Fouad Yazough.