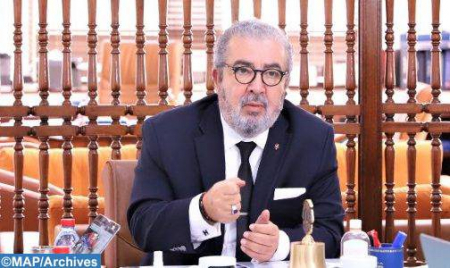 The only possible solution to the Ukrainian conflict “is as the Moroccan stance has underlined twice, very clearly, lies in dialogue, diplomacy, negotiation and respect of territorial integrity of nations,” said the editorialist of the monthly magazine “BAB”. “This war must imperatively stop. Too many innocent victims. Too many refugees. Too much misfortune. Too much suffering,” the Director General of the Moroccan news agency (MAP), Khalil Hachimi Idrissi, pointed out in the op-ed of the latest issue of “BAB” published under the title “An immediate peace”. According to Mr. Hachimi Idrissi, “if the path to immediate peace goes through better consideration of Russia’s security needs by the Europeans and NATO, we have to go through that. If the road to immediate peace requires neutrality of Ukraine within its intact and recognized borders, we have to go through that”. “If the path to immediate peace goes through better respect for cultural rights. Autonomy, for all minorities, we must also go through that,” he insisted. Because, according to him, the war in Ukraine is “the crude expression of Westerners’ inability to find a new security paradigm in Europe that would include Russia and reassure it about its national security”. On the contrary, he explained, NATO – an organization from another age, even almost obsolete – continued to justify its existence by preventing Europe from acquiring an independent, efficient and autonomous defense, and by antagonizing Russia by greedily absorbing almost all the former satellite countries of the USSR. “What had to happen happened. From denials to impostures, from twisted blows to betrayals, the Russian Bear, when he regained some strength, fought back”, said the editorialist of MAP’s monthly magazine. If “nothing justifies the invasion of Ukraine by Russia, nor the procrastination of Europe, nor the claims of NATO, nor the begging of principles of the American Joe Biden”, this war, whose real protagonists use a “proxy” – Ukraine in this case – to fight it out, is condemnable, like any war elsewhere, he pointed out. “Nobody wants the total destruction of this country and the cynical and criminal purification of its citizens” he said, adding that “everyone knows that a Russian victory would inevitably be a Pyrrhic victory. Dramatic and derisory”. “So, we have to sit around a table and start a real global and serious negotiation on the security of each other which would remove the danger of a third world war and the spectre of a generalized nuclear confrontation”, he concluded.