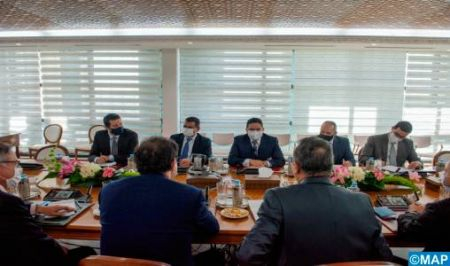 Minister of Foreign Affairs, African Cooperation and Moroccans Abroad, Nasser Bourita, held talks, Monday in Rabat, with chairman of the Moroccan-European Union (EU) joint parliamentary committee, on the Moroccan side, Lahcen Haddad. This meeting was an opportunity to coordinate, exchange views and agree on joint actions between the official and parallel diplomacy, Haddad told the press after these talks. This meeting allowed to examine and coordinate the action at the level of the European Parliament for a fruitful Morocco-EU partnership at the level of this “open” institution that “includes various political and ideological currents”, he added. The joint committee, which brings together different political sensitivities represented in the two Houses of the Moroccan Parliament, provides an opportunity to interact with the groups of the European Parliament to present the point of view of the Kingdom on many issues, said Haddad. It is also a question of examining the various aspects of partnership on vital issues of great strategic importance for the Kingdom and the EU, he said, adding that the success of Moroccan diplomacy, under the leadership of HM King Mohammed VI, is a source of strength to move forward. Haddad emphasized the new momentum of the Morocco-EU partnership at the parliamentary level “because there is a new restructuring (…) and new members, on the Moroccan side, who are well experienced and ready to assume a role of parallel diplomacy”. “There is a new impetus and a new strategy, outlined by HM King Mohammed VI, in relation to the Morocco-EU partnership which must be as political as economic,” he said. The Moroccan-European Union (EU) Joint Parliamentary Committee recently held a series of meetings at the European Parliament in Strasbourg (March 8-10) and Brussels (March 15-17) to deepen consultations and discussions with the European side.