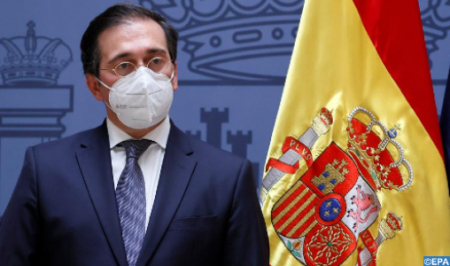 Spanish Foreign Minister, José Manuel Albares, announced on Wednesday that he will visit Morocco on April 1st. Albares, who made the announcement before the Foreign Affairs Committee of the Congress of Deputies (Lower House), said he will hold talks with his Moroccan counterpart, Nasser Bourita. The objective of this visit is to start preparing the “new roadmap” with Morocco to strengthen bilateral relations in all areas, revitalize the working groups and consolidate cooperation in all fields, he explained. The Spanish FM’s visit to Morocco follows Spain’s positive positions and constructive commitments regarding the Moroccan Sahara issue, as outlined in the message addressed to HM King Mohammed VI by the President of the Spanish Government, Pedro Sánchez. “The terms of this message make it possible to envisage a clear and ambitious roadmap in order to sustainably place the bilateral partnership in the framework of the new bases and parameters highlighted in the Royal Address of August 20,” according to a statement by the Ministry of Foreign Affairs, African Cooperation and Moroccans Abroad.