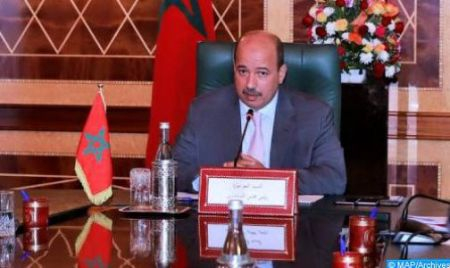 Speaker of the House of Advisors, Naama Mayara, stressed, Friday in Rabat, the importance of cooperation between Morocco’s and Lebanon’s legislative institutions to strengthen bilateral relations. During talks with the Lebanese Ambassador to Morocco, Ziad Atallah, the speaker of the Upper House welcomed the solidity of the bonds between the Kingdom of Morocco and the Republic of Lebanon in various fields of cooperation, namely politics, culture and society. Morocco is working to further enhance these relations, given the great potential for cooperation and investment, and to strengthen the commercial and economic bilateral exchange, he was quoted as saying in a statement issued by the House of Advisors. For his part, the Lebanese diplomat praised the good and solid relations uniting the two countries on all levels, assuring that his country has a great interest in Morocco, which is full of opportunities and potential. Regarding the Moroccan Sahara, Atallah stressed the clear position of his country in favor of Morocco’s sovereignty and territorial integrity. During this meeting, the two parties agreed on the need to intensify their efforts, in order to take advantage of all possible opportunities to deepen the partnership relations between the two brotherly countries.