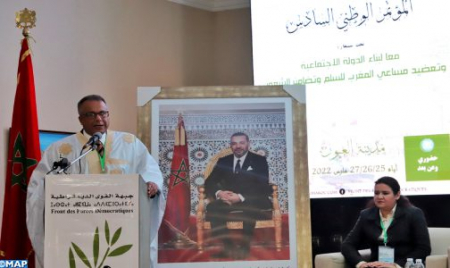 Mustapha Benali was re-elected, Sunday, Secretary General of the Front of Democratic Forces (FFD), at the end of the 6th national congress of the party, held during three days in Laayoune under the sign “Together to build a social State and strengthen Morocco’s efforts in terms of peace and solidarity among peoples”. During this Congress, the financial and moral reports were unanimously approved, while the members of the National Council of the party were elected. The party’s militants also adopted the reports of the Congress commissions. Speaking on this occasion, Mr. Benali underlined that the organization of the 6th national congress of the FFD in Laayoune enabled the militants of the party to discuss the flagship projects undertaken in the region and the aspects relating to development in the southern provinces, welcoming the patriotic spirit of the populations of these provinces who repeatedly express their unfailing attachment to the constants of the Nation and their continuous mobilization in favor of democracy and global development.