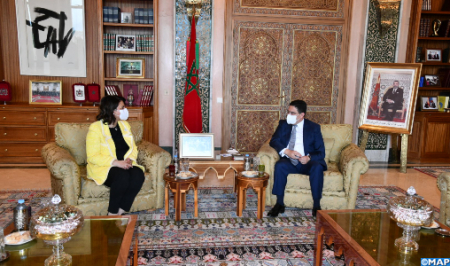 Minister of Foreign Affairs, African Cooperation and Moroccans Abroad, Nasser Bourita, held talks, on Tuesday in Rabat, with the Libyan Minister of Foreign Affairs, Najla El Mangouch. These talks, held on the sidelines of the 21st ordinary session of the Executive Council of the Community of Sahel-Saharan States (CEN-SAD), focused on bilateral relations and the latest political developments in Libya. “The support of the Kingdom of Morocco to the democratic and peaceful transition in Libya was reaffirmed on this occasion,” said El Mangouch in a statement to the press after the talks. Regarding the elections in Libya, the minister stressed that the process related to these deadlines is underway while the UN support mission in Libya is deploying efforts to establish a constitutional basis as a starting point for elections. Highlighting the importance of the Skhirat Agreement in this process, El Mangouch noted that the elections are scheduled before the end of this year and that “all parties are working together to organize transparent elections.” Bourita also held discussions with Chad’s Minister of Foreign Affairs, African Integration and Chadians Abroad, Cherif Mahamat Zene, who serves as Chairman of the Executive Council of CEN-SAD. The 21st ordinary session of the CEN-SAD Executive Council, which is held following the decision taken by the Extraordinary Summit held on April 13, 2019 in N’Djamena, is attended by foreign ministers of member states to discuss various issues aimed at revitalizing this regional grouping.