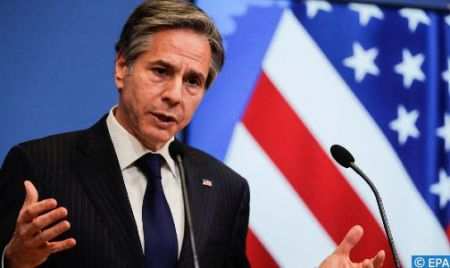 Morocco’s voice and diplomacy have a “very significant” impact in managing many issues and challenges at the regional and global levels, said U.S. Secretary of State Antony Blinken. “Morocco is first and foremost an essential partnership for us, and it has existed for a long time. It is of the utmost importance to us because we obviously act on various issues bilaterally. We act together at the regional level where Morocco’s voice and diplomacy have a very significant impact,” stressed Blinken in an interview with the channel “Medi1 TV”. At the regional level, the U.S. Secretary of State cited the very important impact of the Kingdom’s diplomacy in managing the situation in the Sahel and the Libyan crisis, describing as “essential” Washington’s partnership with Morocco. For the American official, Morocco also plays a leading role in the management of several issues at the global level, particularly in the fight against the Covid-19 pandemic and the issue of climate change. “Morocco has been very successful in the vaccination campaign” against the Covid-19 pandemic, Blinken noted, adding that the United States and the Kingdom are working together in the fight against the pandemic and are looking at what they can achieve across the world, including in Africa. Addressing the issue of climate, he noted that the Kingdom has made major strides in managing the climate crisis, adding that the Morocco-US partnership “not only acts in the region, but more and more at the global level”. Referring to the Negev Summit, which brought together the foreign ministers of Morocco, the United Arab Emirates, Egypt, the United States and Israel, the Secretary of State emphasized that the summit reflects a common desire to jointly produce opportunities for the people of each country by creating links between students and citizens, and by focusing on issues that impact daily life such as investment, infrastructure, climate and global health. This summit, he added, also illustrates the common will to work on security issues without setting aside the future of the Palestinian people, emphasizing the need to establish a state for the Palestinians and to invest in their future.