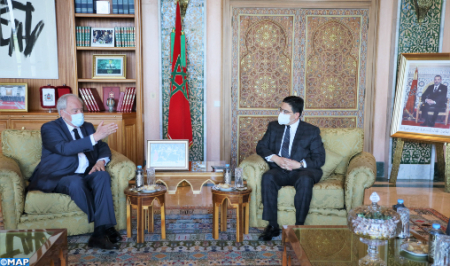 Morocco’s Minister of Foreign Affairs, African Cooperation and Moroccans Abroad, Nasser Bourita, held talks Wednesday in Rabat with the chairman of the France-Morocco Friendship Group at the French Senate, Christian Cambon. Speaking to the press after this meeting, Cambon expressed his joy with “this interparliamentary relationship of which we have been deprived for nearly two years due to COVID-19.” “France and Morocco have absolutely privileged relations, which deserve to be regularly revisited to be nourished by the events and crises that arise,” he said, emphasizing the importance of the France-Morocco Friendship Group; “a positive driving force for the relations’ development, regardless of the context.” Regarding the Moroccan Sahara issue, Cambon said that following the Spanish and German statements, “developments must occur” on the French side, reiterating his personal support for the Kingdom “as a parliamentarian and friend of Morocco.” Cambon, who also serves as chairman of French Senate’s Foreign Affairs, Defense and Armed Forces Committee, revealed that the Ukrainian crisis was on the meeting’s menu, highlighting the importance of “French-Moroccan solidarity to cope with all the excesses that the crisis will lead to.”