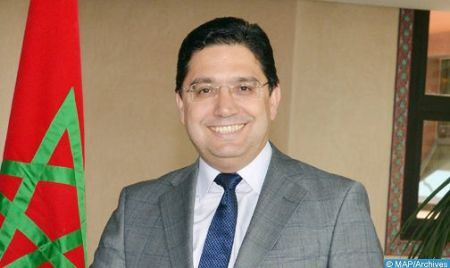 Minister of Foreign Affairs, African Cooperation and Moroccans Abroad, Nasser Bourita, held on Wednesday in Rabat, talks with the Beninese Minister of Foreign Affairs and Cooperation, Aurélien Agbénonci. This meeting was an opportunity to review the various issues at the heart of cooperation between the two countries, said Agbénonci, in a statement to the press after the meeting, highlighting the special affection that His Majesty King Mohammed VI has for Benin and the special relationship that the Sovereign has with his brother, President Patrice Talon. In this regard, the Beninese minister welcomed the excellent level of bilateral relations, ensuring that Morocco and Benin are facing economic and security challenges. The two parties also reviewed the actions that can be taken together to open new avenues of cooperation, he said, saying he shared with Bourita the progress that Benin is making in different areas. Agbénonci thanked Morocco for “the multiform support we have received particularly during the Covid-19 pandemic, but also all these facilities that are granted to our youth, who come to study in Morocco”.