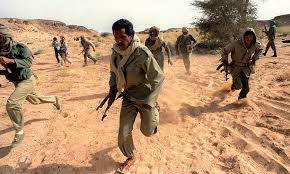 The Western Sahara conflict is a threat to security in North Africa and the Sahel, according to a report by the British parliament which asserts that the Polisario-controlled camps in Tindouf are a fertile ground for the recruiters of the Jihadists operating in the region.
The finding, which is nothing new as it has been often stated in reports of Western experts and intelligence services, came this time in a document drafted by members of the Foreign Affairs Committee of the British House of Commons at the end of a field trip to the region. In this report, the British parliamentarians stressed that Morocco and Algeria are key partners for the UK and other Western countries in addressing the security challenges in the Sahel region.
Unfortunately, relations between the two countries are particularly poor because of the Western Sahara conflict and this hostility negatively impacts on the functioning of the Arab Maghreb Union, and consequently on inter- Maghreb economic cooperation as well as on security cooperation in North -West Africa and the Sahel, deplore the British MPs.
The British Parliamentarians noted that during their tour, many of their interlocutors, including among ordinary citizens, have expressed concerns to see the Tindouf camps become – if this has not already happened- a radicalization center of thousands of young Sahrawis who have lost all hope in the Polisario Front. The MPs recalled that the UN Secretary General had expressed similar concerns describing these camps as “a time bomb.”
The report also noted that there are challenges to the development of stronger relationships with Algeria including “the country’s strong and secretive security services, seen by witnesses as operating almost as like a parallel government.”
The report, which underlined the key role of Algeria and its Moroccan neighbor in strengthening stability and security in the Sahel-Sahara region, called on the British Government to explore options for helping to bring the two Maghreb countries together in a bid to find a solution to the Western Sahara conflict which is straining their bilateral relations and threatening regional security.