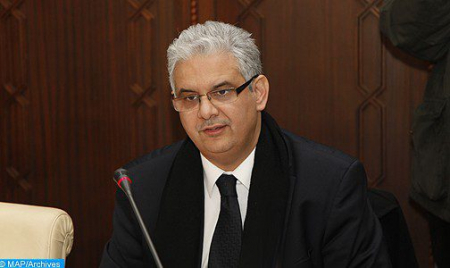 Istiqlal Party Secretary General Nizar Baraka took part, on Friday and Saturday in Seville, in the activities of the 20th extraordinary national congress of Spain’s Partido Popular (PP, People’s Party). On this occasion, Baraka met with the former president of Spanish government, Mariano Rajoy, the outgoing President of the PP, Pablo Casado and the vice president of the Spanish Parliament, Ana Pastor, said an Istiqlal Party statement. He also exchanged with the person in charge of external relations at the PP, Bernard Pons, and the general coordinator of the Spanish party, Elías Bendodo Benasayag, it adds. These meetings were an opportunity to express the shared desire to strengthen bilateral relations between the two countries and the two parties and also to explain the importance of the new international momentum that knows the Moroccan Sahara issue, driven by His Majesty King Mohamed VI, with the recognition by several world powers that the Moroccan autonomy initiative is the only solution to resolve this artificial conflict. The participation of Nizar Baraka in the 20th National Congress of the PP was an opportunity to meet with the Secretary General of the European People’s Party (EPP), Antonio López Isturi White and discuss issues of common interest between the EPP and the party of Istiqlal, concludes the statement. At the 20th Extraordinary Congress of the People, the President of the Autonomous Community of Galicia, Alberto Núñez Feijóo, was elected new president of the party.