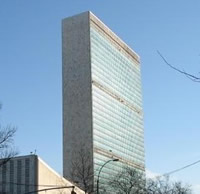 The third round of negotiations between the Kingdom of Morocco and the Polisario Front starts this week in Manhasset (Long Island, USA) and is considered by the specialists as full of opportunities and also of dangers.
Indeed, it appears clearly that the Polisario Front does not have any more other choices than finding an honorable issue to the conflict, the determination of Morocco to preserve its territorial integrity being strong.
The support of France, Spain and the United States among other nations to the Moroccan autonomy initiative is a positive sign to ending the conflict which has lasted for almost 32 years.
Morocco carried out a great step ahead while proposing a large autonomy for its southern territories, thus recognizing the cultural identity of this area and offering a form of self-determination to the sahraoui people. Another obstacle in the resolution of this conflict was also cleared last month when Morocco affirmed to have made the necessary arrangements so that the sequestered of Tindouf can exert their right to return to the motherland, Morocco.
This new Moroccan strategy should weigh on the private talks of Manhasset III, which will be probably an important step in the cycle of negotiations.
Indeed, the big absent remains Algeria, who refuses to recognize that it is part of the conflict and that it holds one of the keys to a peaceful resolution.