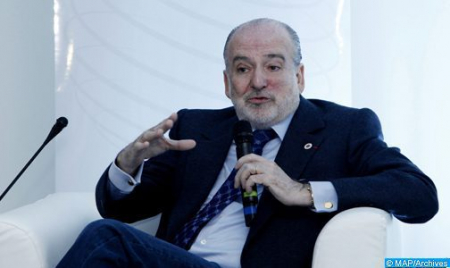 Royal diplomacy is “the keystone of the dynamic of clear stances” in support of the territorial integrity of Morocco, which were expressed at the regional and international levels, underlined Jean Paul Carteron, Founding President of the Crans Montana Forum. “The unwavering, historical and dynastic commitment of HM King Mohammed VI and His resolute action for the defence and the preservation of the territorial integrity of the Kingdom and the international recognition of the Moroccanness of the Sahara are the keystone of the increasing number of strong and clear positions”, Mr. Carteron told MAP, adding that “the incessant disputes which have tired the whole world were finally perceived as far-fetched. And this is what they are! “. He commended, in this regard, the new “courageous, very strong and symbolic position of Spain compared to a certain wait-and-see attitude of other European countries”, noting that “Madrid’s position is a resounding consecration of the action of a firm and intangible royal diplomacy with regard to the territorial integrity of the Kingdom”. “Spain’s courageous stance paves the way to a real metamorphosis in relations between the two countries,” he pointed out. By displaying loud and clear its support for the autonomy plan, Spain has chosen the path of realpolitik. Morocco is respected for being a reliable partner and bearer of peace, stability and development, “while next door, in the eastern neighbor, we find a regime in full decline, busy, constantly and incomprehensibly, to maintain a climate of aggressiveness of which it is the first victim on the economic and social level in particular,” he said. While slamming the “agitation and aggressiveness that has become almost genetic” of the Algerian authorities regarding the Moroccan Sahara issue, he hailed the fact that “Spain has finally crossed the line of realism by expressing aloud a position that is only obvious while taking the risk – quite relative – of creating controversy with people who live only on controversy and whose aggressive attitude towards Morocco is incomprehensible”. “Faced with this permanent aggressiveness, Morocco has implemented a diplomacy of great wisdom and constant information to thwart the plots orchestrated by Algeria, whose vast diplomatic network has the sole occupation of acting against the Moroccan interests. This is an obvious fact that I have seen many times,” he noted. “No one is fooled by this unhealthy guerrilla warfare led by Algeria through an imaginary conflict over the Moroccan Sahara,” Mr. Carteron stressed. An observation unanimously shared by several officials from around the world, observers, decision-makers and opinion leaders who took part in the various editions of the Crans Montana Forum in Dakhla, this high-level dialogue forum which “was in its turn the object of a relentless war” on the part of the Algerian authorities, for the simple reason that it “contributes to the influence and global integration of the towns and the population of the Moroccan Sahara”, he said.