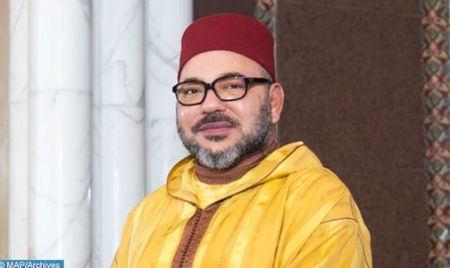 His Majesty King Mohammed VI launched, on Tuesday in the old medina of Rabat, the national operation “Ramadan 1443”, initiated by the Mohammed V Foundation for Solidarity on the occasion of the holy month of Ramadan. This action of generosity, highly significant in this blessed month, reflects the constant royal solicitude towards the populations in situation of social vulnerability and comes to enshrine the values of humanity, solidarity, mutual aid and sharing characteristic of the Moroccan society. Worth 103 million dirhams, the operation “Ramadan 1443” will benefit this year nearly 3 million people, established in 83 provinces and prefectures of the Kingdom and grouped within 600,000 households, of which 459,500 live in rural areas (77% of beneficiary families). Organized with the financial support of the Ministry of Interior and the Ministry of Endowments and Islamic Affairs, this national operation, which is in its 23rd edition, has become over time an annual event to provide assistance and comfort to the most vulnerable social categories, including widows, the elderly and people with disabilities. This year, and given the stability of the epidemiological situation (according to the latest data from the Ministry of Health and Social Protection), the food aid distribution system has been relocated to the distribution Centers managed by local authorities. Thus, for the smooth running of this operation, thousands of people are mobilized, supported by social workers and volunteers, at more than 1,800 distribution points set up throughout the country. They will ensure the delivery of food aid to 600,000 heads and representatives of beneficiary families. The implementation of this initiative is also subject to controls, particularly at the level of two committees, one local and the other provincial, which monitor the supply of distribution Centers, the identification of beneficiaries and the distribution of foodstuffs. In fact, the identification of the beneficiaries is subject, as it is every year, to a fieldwork carried out by the local authorities and allowing to evaluate the living conditions of these people and their current situation on the basis of socio-economic criteria. The social services of the Royal Armed Forces, the National Mutual Aid, the National Promotion and the local authorities are also lending their support to the Mohammed V Foundation for Solidarity to ensure the smooth running of this solidarity operation. The Ministry of Health and Social Protection and the National Office of Food Safety (ONSSA) ensure, for their part, the quality control of the food products distributed. The national food support operation has, since its launch in 1998, mobilized an overall budget of more than 1.5 billion dirhams, with the number of beneficiary families increasing from 34,100 in 1998 to 600,000 as of 2020. The operation “Ramadan 1443” is thus added to the various actions and humanitarian initiatives undertaken by His Majesty King Mohammed VI in order to promote the culture of solidarity and to ensure a sustainable human development.