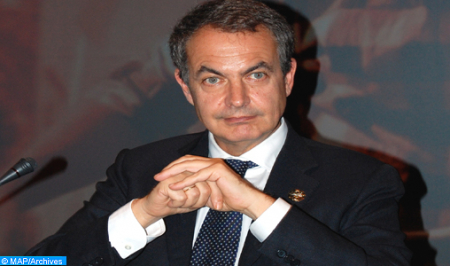 Former President of the Spanish Government, José Luis Rodriguez Zapatero, said that the autonomy plan is “the strongest and safest way” to definitely settle the dispute over the Moroccan Sahara. “I have supported this plan since its presentation by Morocco in 2007. This is the strongest, the safest and best way for everyone,” Zapatero pointed out in an interview with MAP on the eve of the visit to Morocco of the President of the Spanish Government, Pedro Sanchez, at the invitation of HM King Mohammed VI. “Morocco has presented the plan to the United Nations Security Council that considered it a significant and serous effort. It therefore fits completely in the United Nations process, which we support and respect,” he said, while expressing his support to the stance of the government of his country that has recognized the relevance of autonomy under Moroccan sovereignty as being “the most serious, realistic and credible basis” to settle this artificial conflict. “The current Spanish government has made its position known in a clear and very explicit way. It is positive because it is always wise for policies to be clearly and transparent so that all actors know what the rules are”, Mr. Zapatero underlined. “I fully share this position expressed by the Spanish government,” he stressed. According to Mr. Zapatero, “the most important thing is to reach an agreement, that’s what worked throughout history. The divisions do not lead to anything. The most important thing is to negotiate, to agree, to bring serenity, wisdom, spirit of generosity and reconciliation to achieve a solution”. As regards the new stage initiated between Morocco and Spain, Zapatero said that “it is a positive message to the world in this serious crisis”, noting that the new roadmap of bilateral relations must be based on “pillars uniting two friendly countries such as mutual respect, friendship, economic issues, migration and cooperation”. “I think the revitalization of bilateral relations is very important for Spain, for Morocco, for North Africa, for the Maghreb and for the international community, particularly in the current situation,” said the former President of the Spanish Government (2004-2011). “The relationship between North and South, represented by Spain and Morocco is of paramount importance and it is important that this relationship enters a path of consolidation, strengthening, friendship and cooperation, as it should be between the two countries,” he said, noting that the two countries can work together to give a “more global dimension” to their relationships by consolidating the multidimensional partnership in the framework of North-South cooperation. This new stage of relations between Morocco and Spain “will help deepen and strengthen the spirit of cooperation and understanding in a global world where Europe is of great importance for Africa and Africa is just as important for Europe,” he pointed out. “There is definitely clear support from the European Union to Spain’s policy towards Morocco and this will contribute very positively to the interest brought by Morocco to its links with the European Union”, he concluded.