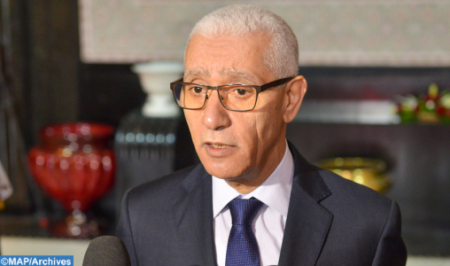 The Speaker of the House of Representatives (lower house), Rachid Talbi El Alami, held talks, on Wednesday in Strasbourg, with European Parliament President Roberta Metsola on means to strengthen cooperation between the two institutions. This interview takes place within the framework of Talbi El Alami’s two-day working visit to the European Parliament at the head of a large delegation of the House of Representatives. In a statement to the press, Metsola welcomed a “very good meeting” which allowed to discuss several issues related to cooperation between the two institutions and exchange views on ways to strengthen the long-standing ties with Morocco, a “partner” and “friend” of the European Union. She expressed her willingness, during her term as President of the European Parliament, to strengthen this “very close” cooperation between the Kingdom and the European Union. Exchanges with Talbi El Alami focused on issues related to security, immigration, regional stability and priorities of the Euro-Mediterranean region, said Metsola, highlighting the importance of this meeting which comes after two years of restrictions due to the COVID-19 pandemic. For his part, the lower house speaker explained that this meeting focused on two main themes, namely the challenges of the international situation with the COVID-19 pandemic, the supply of international markets in commodities and price increases related to the Russian-Ukrainian conflict. The second component concerns the Parliamentary Assembly of the Union for the Mediterranean, of which Morocco will take the presidency this afternoon, added El Alami, who stressed the need to restructure this body to enable it to fully carry out its missions. The Moroccan official further highlighted the leading role played by the Kingdom in this Assembly on important issues such as security, energy, the fight against terrorism and drug trafficking, as well as democratic support by hosting the inter-Libyan dialogue, border control and exchange of information with European partners. In this respect, the Speaker of the House of Representatives said that these challenges can only be met in the presence of a strong parliamentary assembly and a greater involvement of European partners. This issue was raised during the meeting with Metsola who assured of his willingness to work alongside Morocco to inject a new dynamic to this parliamentary assembly of the Union for the Mediterranean and strengthen its roles, said Talbi El Alami. The Speaker of the House of Representatives is on a two-day working visit to the European Parliament, leading a large parliamentary delegation, including Lahcen Haddad, Chairman of the Morocco-EU Joint Parliamentary Committee and Najib El Khadi, Secretary General of the Moroccan lower house.