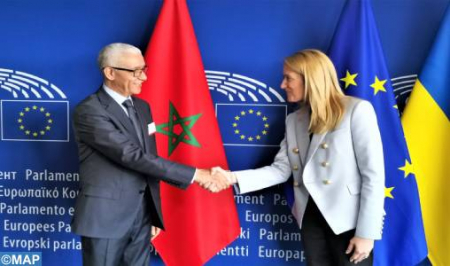 Morocco has officially taken, Wednesday in Strasbourg, in the person of the speaker of the House of Representatives, Rachid Talbi El Alami, the presidency of the Parliamentary Assembly of the Union for the Mediterranean. The solemn handover of the presidency of this body to Morocco took place during the meeting of the Mediterranean delegation chaired by European Parliament President, Roberta Metsola, in the presence of the Vice-President, Pina Picierno and several European parliamentary officials. On this occasion, Talbi El Alami, in his capacity as the new president of this Mediterranean Parliamentary Assembly, presented the political priorities of the Moroccan presidency as well as the calendar of its activities. Talbi El Alami, who leads a large delegation of the House of Representatives, including Lahcen Haddad, Chairperson of the Mixed Parliamentary Committee Morocco-EU, and the Secretary General of the Lower House, Najib El Khadi, had previously held talks with Metsola and European parliamentary officials including group and committee chairs. They are the chairman of the Maghreb delegation and Co-Chairperson of the Mixed Parliamentary Committee Morocco-EU, Andrea Cozzolino, the Vice-Chairman of the Committee on Budgetary Control Tomas Zdechovsky, the Chairman of the EPP Group European People’s Party Manfred Weber, and the Vice President of the EPP Andrey Kovatchev, the President of the Political Committee PA-UfM Costa Mavrides, the rapporteur of the Committee on the Environment, Public Health and Food Safety, Mohammed Chahim, as well as the President of the Identity Group, Marco Zanni, in addition to the MEP Saskia Bricmont of the Greens-Ale Group (European Free Alliance Group). These talks were an opportunity for Talbi El Alami to examine with his interlocutors the means to strengthen cooperation between the House of Representatives and the European Parliament and between Morocco and the European Union. The Speaker of the House of Representatives is on a two-day working visit to the European Parliament, following the invitation of its President Roberta Metsola, as part of regular political consultations between the two institutions.