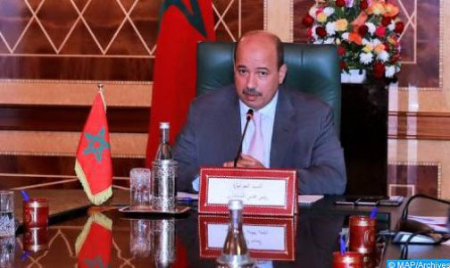 Speaker of the House of Advisors (Upper House), Naama Mayara, stressed that the second House of parliament has developed a strategy that aspires to make it a hub of expertise and contribute to the formulation of public policies of the State. This strategy will be implemented through thematic forums such as the Forum on Social Justice organized by the House of Advisors, Mayara told MAP. He noted that the upper house willl hold during the current legislative term the “Forum of Moroccan youth”, the “Forum of Regions”, the “Climate Business Forum” and the “Forum of Professional Chambers”, adding that these events will allow a diagnosis of these areas and will contribute “to set the real strategies and issue recommendations that can be declined in proposals and draft laws”. Mayara also underlined that the diversity of the composition of the House of Advisors “allows us to move in this direction and have a body that ensures a very important role”. According to the objectives of this strategy, the Upper House will be “effective and capable of institutionalizing public debate, in order to strengthen citizens’ trust in political and partisan action”. Regarding the second session of the current legislative year, which opens Friday, Mayara said it will be held in the wake of the repercussions of the Covid-19 pandemic and in light of the effects of the Russian-Ukrainian crisis, noting that the House will consider during this session a series of matters of great topicality and will take recommendations in this regard, in the form of proposals or draft laws or strategies for government action.