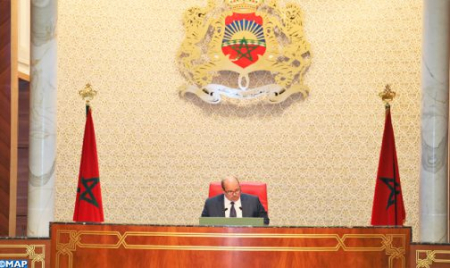 The House of Advisors (Upper House) will work to strengthen its parliamentary diplomacy and its geostrategic positioning through the exchange of visits and its action within regional, continental and international parliamentary unions, said Friday, Naama Mayara, speaker of the Upper House. The Second House of Parliament will also continue its qualitative initiatives in the context of South-South cooperation, said Mayara in his speech at the opening of the second session of the legislative year 2021-2022. In this regard, he highlighted the achievements made by Morocco through the collective  official and parallel effort, and which was crowned by the unprecedented breakthrough of Moroccan diplomacy under the enlightened leadership of His Majesty King Mohammed VI, after the new stance of Spain considering the Moroccan Autonomy Plan as the most serious, realistic and credible basis for resolving the dispute over the Moroccan Sahara. Praising the historic position of Madrid, Mayara underlined the need to continue the action while welcoming the achievements made particularly through the increase in the number of diplomatic representations in the Southern Provinces to 24, after the opening last week in Dakhla, of the consulate general of the Organization of Eastern Caribbean States (OECS). Regarding the parliamentary diplomacy, the Speaker of the upper House also recalled the working visit he made to Panama, during which he took part in the work of the Annual General Assembly of the Parliament of Latin America and the Caribbean (Parlatino), his participation in the Summit of Presidents of Regional Parliamentary Unions in Africa and Latin America, as well as his working visits to Guatemala and the United Arab Emirates. In addition, Mayara highlighted the organization by the House of Advisors, under the High Patronage of HM King Mohammed VI, of the 11th Congress of the Association of Senates, Shoora and Equivalent Councils in Africa and the Arab World, as well as the South-South Parliamentary Dialogue Forum of Senates and similar councils from Africa, the Arab world, Latin America and the Caribbean.