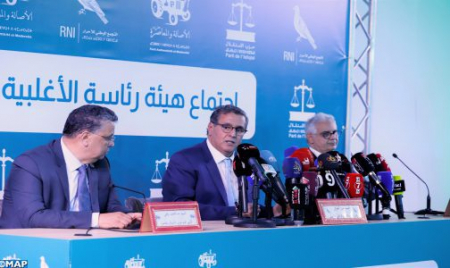 The presidency of the coalition of the governmental majority has reaffirmed its commitment to support citizens to cope with the repercussions of the international situation, marked in particular by the Russian-Ukrainian conflict and the resulting economic impact. This announcement was made Friday at the monthly meeting of the coalition under the chairmanship of the President of the National Rally of Independents (RNI), Aziz Akhannouch, in the presence of the Secretaries General of the Authenticity and Modernity Party (PAM), Abdellatif Ouahbi, and the Istiqlal Party, Nizar Baraka. In this context, Akhannouch said that the government, despite the difficult international context marked by the economic repercussions of the Russian-Ukrainian crisis, including soaring prices of some products, has taken a series of measures to mitigate the effects of this crisis, particularly in the sectors of tourism, transport and agriculture. The dynamics of government action and its accelerated pace will contribute to the implementation and achievement of all government programs, he noted, noting that despite the crisis, “nothing can impact the effort to achieve the government program”. Akhannouch mentioned in this regard the launch of programs “Forsa” and “Awrach”, with a very large budget, saying that the government will continue to interact quickly to all issues to address them and find appropriate solutions. For his part, Nizar Baraka said that the government coalition is aware of the difficult situation that the country is going through due to the repercussions of the Russia/Ukraine conflict and its global impact. However, “we are firmly committed to working to mitigate the impact of this situation on citizens and businesses,” he said. Baraka noted that despite the crisis, the government has not taken any steps to reduce investment, saying that the government is mobilized to serve citizens, including the middle class and low-income categories, and protect them from the fluctuations of the current situation. Ouahbi stressed that the government’s commitment to mitigate the negative impact of the crisis “illustrates how our economy remains strong and able to cope with future challenges”.