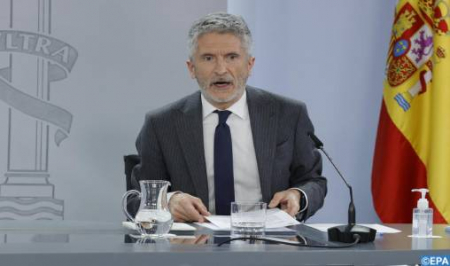 Spain and Morocco, two friendly countries, have laid the foundations of a “21st century relationship”, stressed the Spanish Minister of Interior, Fernando Grande-Marlaska. A “framework of bilateral relations of the twenty-first century” opens today ending a period of “misunderstanding between two fraternal, friendly, cooperative and truly loyal countries,” said Saturday, Grande-Marlaska in statements to the media. Morocco and Spain have established “a 21st century relationship between two countries that have always been close to each other,” said the Spanish minister, adding that the visit to Morocco of the President of the Government Pedro Sanchez, at the invitation of HM King Mohammed VI, has allowed the “restoration” of full bilateral relations. Rabat and Madrid will deepen their cooperation in the areas of “security and immigration”, but also “transversally” to establish a more comprehensive partnership encompassing infrastructure, industry, culture, education and vocational training, said Grande-Marlaska. “I can say that relations with Morocco have reached an absolutely important level of understanding,” he added.