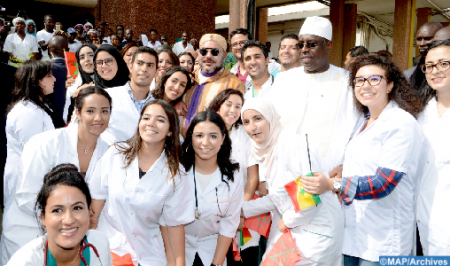 The Senegalese newspaper “EnQuête” devoted Wednesday a feature to the long-standing relations between the Kingdom of Morocco and the Republic of Senegal by highlighting the secrets of a “successful integration” of the Moroccan community in this West African country, in “a world where barriers are increasingly erected between peoples”. “Present in trade, finance, medicine, industry … the Moroccan community in Senegal is a fine example of successful integration, in a world where barriers are increasingly erected between peoples,” wrote the newspaper in an article entitled: “The secrets of integration” and illustrated with a photo of His Majesty King Mohammed VI and the President of the Republic of Senegal, Macky Sall, taken with Moroccan students during the visit made by the Sovereign to the main hospital in Dakar in 2016. The media emphasized that between the two countries, “relations are very old and built on very solid foundations of blood and religion,” recalling that Morocco and Senegal had a few decades ago, under the leadership of former head of state Leopold Sedar Senghor and the late HM King Hassan II, signed the Convention of Establishment which gave nationals of each country the right to settle freely in the other country, without hindrance. In addition to the tax field, noted the publication, “almost all aspects of economic and social life were covered by this very ambitious Convention”, noting that under this Convention, the nationals of each side will have access to public employment in the other party, under the conditions determined by the legislation of each state. Every year, many Senegalese travel to Fez to visit the mausoleum of Sheikh Ahmed Tidjani, one of the greatest propagators of Islam in West Africa, according to paper, which stressed that on the other hand, “each year, there are dozens, even hundreds of Moroccan nationals who choose Dakar, especially the Faculty of Medicine to continue their studies”. “Without visas, without special formalities to settle in Senegal, the Moroccan community has continued to grow over the years, (…). Perfectly integrated, they are in the fabric trade, medicine, big business, especially banking and insurance,” said the daily, which noted that Moroccans, in many areas of economic and social life, enjoy the same privileges and are subject to the same obligations as Senegalese nationals.