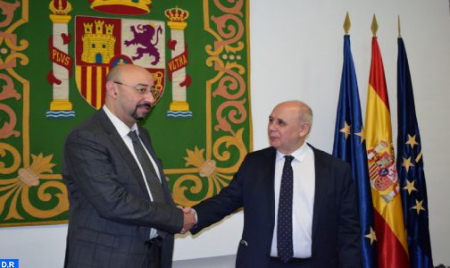 The strengthening of Moroccan-Spanish cooperation between local elected officials was the focus of a working visit made Monday to Spain by the president of the Moroccan Association of Presidents of Communal Councils (AMPCC), Mounir Laymouri. According to a statement by the AMPCC, Laymouri held talks with the Secretary General of the Spanish Federation of Municipalities and Provinces (FEMP), Carlos Daniel Casares Diaz, at the headquarters of the Federation in Madrid, on ways to cooperate in various areas of common interest, particularly through the consolidation of the role of local elected officials in sustainable development and the exchange of successful local experiences in management and territorial governance. During this meeting, AMPCC president reviewed the novelties of the constitutional and legal framework of local authorities and gave an overview of the evolution of the system of decentralization and advanced regionalization in the Kingdom, said the statement. For his part, Casares Diaz stressed the importance of Moroccan-Spanish cooperation between local elected officials on issues of local management and development, the statement said.