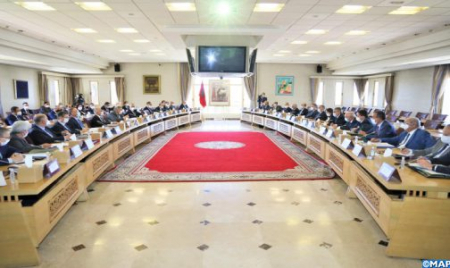 Means to accelerate the implementation of the royal project of advanced regionalization were the focus of a meeting held Wednesday in Rabat. This meeting, held in the presence of representatives of ministerial departments that have signed the Framework for the implementation of the exercise of powers of the regions, was an opportunity to review various priority issues to promote the efficient implementation of this royal project. On this occasion, ministers of Agriculture, Fisheries, Rural Development and Water and Forests, Mohammed Sadiki, of Equipment and Water, Nizar Baraka, and of National Education, Preschool and Sports, Chakib Benmoussa, made presentations on the Program for the Reduction of Territorial and Social Disparities, the water situation in Morocco and the strategic vision of the national education system. This meeting was held in the presence of Minister of Interior, Abdelouafi Laftit and the Minister Delegate to the Minister of Economy and Finance, in charge of the budget, Fouzi Lekjaa. The meeting addressed the means to reduce territorial and social disparities especially in rural areas, Sadiki told reporters following the event. For his part, Baraka said that this meeting was an opportunity to discuss water issues encountered on the national territory. As for M’barka Bouaida, President of the Association of Regions of Morocco and the Council of the region Guelmim-Oued Noun, she noted that this meeting was an opportunity to express the full involvement of all stakeholders in the success of the advanced regionalization.