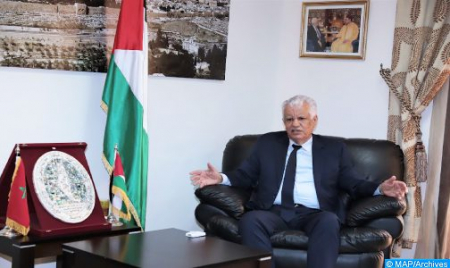 The Palestinian ambassador to Rabat, Jamal Choubki, has commended the stance of the Kingdom of Morocco regarding the latest Israeli attacks on the Al-Aqsa Mosque. Speaking to MAP, the Palestinian diplomat said that the Moroccan position expresses the Kingdom’s rejection of any Israeli measure that may impose a new situation in Al-Quds in order to change the religious and civilizational status of the holy city. Morocco’s denunciation of the latest Israeli aggressions against Palestinian worshipers at the Al-Aqsa Mosque and against the Palestinian people in various regions of the country is in line with the Arab and Muslim position, added the Palestinian ambassador in Rabat, stressing that the statement issued by the ministry of Foreign Affairs, African Cooperation and Moroccans Abroad set the record straight regarding the Moroccan stance which was officially notified to the Israeli side. Mr. Choubki also underlined the importance of the intensification of contacts by Morocco in order to put an end to the latest Israeli aggression. The Kingdom of Morocco, whose Sovereign, HM King Mohammed VI, chairs the Al-Quds Committee under the Organization of Islamic Cooperation, has expressed its strong condemnation and denunciation of the of the raid conducted by the Israeli occupation forces on the Al Aqsa Mosque, the closing of its gates and the attack on unarmed worshipers in the mosque compound, causing many injuries. In a statement, the ministry of Foreign Affairs, African Cooperation and Moroccans Abroad said that this blatant aggression and methodical provocation during the holy month of Ramadan against the sanctity of the mosque and its place in the heart of the Islamic Ummah will only fuel feelings of hatred and extremism and destroy the chances of reviving the peace process in the region. The Kingdom of Morocco calls on the United Nations and the international community to intervene urgently to put an end to these violations and assaults against the defenseless Palestinian people and its sacred values, it added. Upon instructions from HM King Mohammed VI, the condemnation and denunciation were communicated directly to the head of the Israeli liaison office in Rabat, the statement concluded.