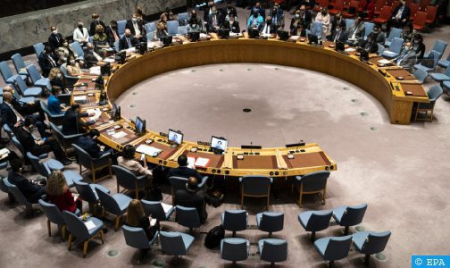 The UN Security Council will hold, this Wednesday in New York, its semi-annual closed-door consultations meeting on the Moroccan Sahara issue, with the participation of the Personal Envoy of the UN Secretary General for the Sahara, Staffan de Mistura, and the Special Representative for the Sahara and head of MINURSO, Alexander Ivanko. These consultations take place in a context marked by growing support for the Moroccanness of the Sahara, the legitimacy of the Kingdom’s rights over its southern provinces and the autonomy plan as the one and only solution to end this regional dispute inherited from the Cold War period. Indeed, the pre-eminence, seriousness and credibility of the Moroccan initiative have been enshrined in the 18 consecutive resolutions of the Security Council since 2007, including resolution N° 2602, adopted in October 2021. The meeting also comes at a time when the Moroccan autonomy initiative continues to garner strong and active support from United Nations member states, many of whom support the autonomy plan. Thus, Spain considers the Moroccan autonomy initiative, presented in 2007, as “the most serious, realistic and credible basis for the resolution of the dispute” over the Moroccan Sahara. This position was expressed last month by the President of the Spanish Government Pedro Sanchez in a message to His Majesty King Mohammed VI, as well as during his recent visit to the Kingdom, at the invitation of the Sovereign. Last January, Germany also considered the autonomy plan as a “serious and credible effort by Morocco and a good basis for reaching an agreement” to this regional dispute. The Philippines expressed its strong support for the sovereignty and territorial integrity of Morocco, while deeming as a “good basis” the autonomy plan to settle the regional dispute over the Moroccan Sahara. This position was expressed by the Philippines’ Minister of Foreign Affairs, Teodoro Locsin Jr., during a visit to Morocco last March. The recent Spanish, German and Filipino decisions come after the United States recognized Morocco’s full sovereignty over its Sahara and supported the autonomy initiative as the only basis for settling this dispute. The international situation is also marked by the opening of 25 general consulates by Arab, African and American countries in the cities of Laayoune and Dakhla, the last of which is that of the Organization of Eastern Caribbean States (OECS), which brings together six UN member states, namely Grenada, Saint Vincent and the Grenadines, Antigua and Barbuda, Saint Lucia, Dominica and Saint Kitts and Nevis. The opening of these consulates thus consecrates the international recognition of the Moroccanness of the Sahara. The latest UN Security Council resolution, which extended the mandate of MINURSO for one year (October 31, 2022), consolidated and confirmed the continuity of the round table process with its modalities and with its four participants – Morocco, Algeria, Mauritania and the Polisario – as the one and only framework for the settlement of the regional conflict over the Moroccan Sahara.