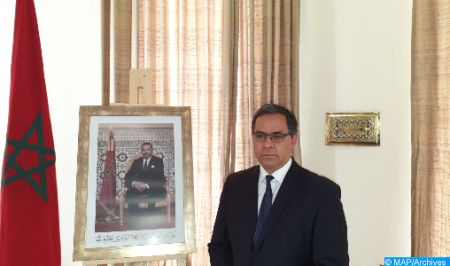 Morocco reiterated, Tuesday before the African Union’s Peace and Security Council (PSC), its solidarity with the states of the Great Lakes region, stressing the necessity of effective cooperation and collaboration among member countries to combat and eradicate the scourge of terrorism and create an environment conducive to stability and development in the region. Speaking at a PSC meeting on the situation in the Great Lakes region, Ambassador, Permanent Representative of Morocco to the AU and UNECA, Mohamed Arrouchi reaffirmed the Kingdom’s solidarity with the countries of the region, whose total population amounts to 150 million, calling on the AU Peace and Security Council to respond to their legitimate aspirations for peace and prosperity. In that regard, the diplomat stressed the need to adopt a multidimensional approach based on peace-security-development and associate other AU departments with the implementation of the said approach. Arrouchi, who leads the Moroccan delegation to this session, reiterated the Kingdom’s commitment to ensure peace and stability in DR Congo, while recalling to this effect the contribution to troops within the United Nations Stabilization Mission in the Democratic Republic of the Congo. The delegation of Morocco noted that an integrated approach, combined with the firm commitment of all stakeholders, remains the only way to establish lasting peace and stability in the region and fight terrorist groups in the east of the country. In light of the recent progress made in the implementation of the commitments under the Framework Agreement for Peace and the improvement of the climate of trust between its signatory parties, the Moroccan delegation reiterated the call to the various stakeholders to seize the current diplomatic momentum and address the challenges of peace and development in the region. The delegation also expressed its support for the proposals made to the PSC by the Deputy Prime Minister and Minister of Foreign Affairs of the DRC, namely scheduling a field visit to the East of the country, qualifying the attacks as acts of terrorism and submitting this classification to the Malabo Summit on the fight against terrorism and the UN Security Council. The Moroccan delegation reaffirmed its commitment to the sovereignty, independence, unity and territorial integrity of the countries of the region, stressing the imperative of respecting the principles of good neighborliness and non-interference in the internal affairs of States.