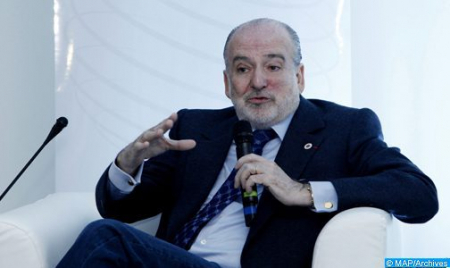 The time for realpolitik and clear choices in favor of the Moroccan Sahara has come, especially for the countries within the EU, says the Crans Montana Forum’s Chairman and Founder, Jean-Paul Carteron. “Many States will realize that taking over the UN Security Council’s risk-free language on Morocco is no longer enough. And when Royal Diplomacy now demands clearly stated positions on this issue which, in reality, has never been one, it consolidates its leadership in the construction of a stable regional security and shared prosperity”, writes Carteron in a new analysis devoted to the Sahara issue in the context of the new Spanish position supporting the Moroccan autonomy initiative. “Since March 18, 2022, Spain considers the Moroccan autonomy initiative as the most serious, realistic and credible basis for the resolution of the dispute” relating to the Sahara, he says. For the President and Founder of the Crans Montana Forum, this political position “which tends to become worldwide at the level of democratic States naturally induces the notion of the uncontested Moroccanness of the Southern territories”. Indeed, how could one concede autonomy to a territory of which one would not be the master ? he wonders. He adds: “After so many years of controversy and false debates – but also of pain – generated by a country (Algeria) that continues to sink into an unfathomable political, economic and social abyss, the Spanish decision constitutes the most decisive of all recent diplomatic and political developments in terms of security in Africa and particularly in the Maghreb. These are now major geostrategic implications at the global level that are expected”. He notes, in this analysis entitled “And if we stop talking about this false problem of the Sahara”, that at a time when “the world is agitated by heavy upheavals and war has resurfaced in Europe, it is clear that the policy of half-measures and procrastination must definitively give way to Real Politik, the affirmation of operational solutions and the rejection of international provocations aimed at satisfying public opinion in distress”. The Spanish government has become aware that the association that was once proposed to it was ultimately aimed at undermining free Moroccan interests and to feed some smoky dreams of regional hegemony in North Africa, he notes. Carteron believes, in this regard, that “the Spanish foresight will push many countries, especially in Europe, to follow its example, including France which through clear and realistic positions can now claim a renewed moral authority in the management of world affairs”. He deplores, moreover, the attitude of “a number of countries, specialists in the management of the goat and the cabbage which have been in the habit for too long of applauding the Moroccan plan while leaving the door open to the unrealistic thesis of the referendum defended at great expense by Algeria and its polisario”. “The misfortunes of the world will make governments more realistic and closer to their real interests. The end of the game has been whistled. Let’s hope it will be the same in Brussels,” he concludes.