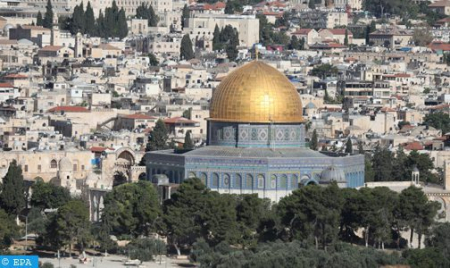 After Algeria obstructed a statement by the group of Arab ambassadors to the United Nations in New York regarding the recent escalation in the Al-Aqsa Mosque compound, its representative to the 4th meeting of the Arab Ministerial Committee for International Action against Illegal Israeli Policies and Measures in Occupied Al-Quds, made, on Thursday in Amman, a similar attempt that failed. Noting that the final statement of the committee included a paragraph highlighting the role of His Majesty King Mohammed VI, Chairman of the Al-Quds Committee and the Bayt Mal Al-Quds Asharif Agency, in supporting this holy city and the resistance of its inhabitants, the Algerian representative demanded that the statement also include a paragraph on the alleged role of the Algerian president in this regard. However, the participants did not give any consideration to this request and the declaration was thus adopted unanimously as proposed by the chairmanship of the Committee and the General Secretariat of the League of Arab States, with the above-mentioned paragraph on the chairmanship of the Al-Quds Committee in full. The Committee’s rejection of the Algerian request thus enshrined the isolation of Algeria, which had no choice but to formulate reservations on the statement, which do not affect the Arab consensus in support of Al-Quds and its inhabitants.