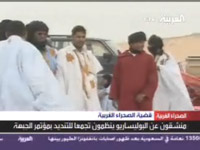 During their congress in Tifariti, several members of the polisario Front announced their wish to join Morocco and its autonomy initiative for the Sahara. It is the first time that a dissidence of this importance is taking place within the Polisario Front, disorienting the current direction.
Feeling the wind of protest, the secretary General of the Polisario, Mohammed Abdelaziz tried to give pledges of opening by proposing that the mandate of the Secretary General will be limited to 4 years only. Afraid not to be re-elected and looking for an honorable exit, he proposes that his mandate lasts only four years.
A scission took place within the Polisario Front, the dissenting voices having more and more impact. This proves that the Moroccan initiative has created doubt within the separatists, who are now confronted to a simple choice: either follow the “hard” line of the Polisario Front, or find an exit to the conflict that respects their right to self-determination while enabling them to return to Morocco.
Through the autonomy plan, Morocco offers an honorable exit to the combatants of the Polisario Front who will choose to seize this opportunity.