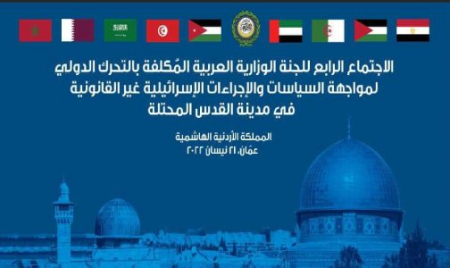 The emergency meeting of the Arab Ministerial Committee in charge of international action against illegal Israeli policies and measures in occupied Al-Quds opened Thursday in Amman, with the participation of Morocco. Morocco is represented at this meeting, held at the invitation of Jordan, which chairs the Committee, by minister of Foreign Affairs, African Cooperation and Moroccans Abroad, Nasser Bourita. In addition to the Kingdom of Morocco, the Committee includes the Kingdom of Saudi Arabia, the Kingdom of Jordan, Palestine, Qatar, Egypt, Tunisia as President of the Arab Summit, as well as Algeria. Also taking part in this meeting, the State of the United Arab Emirates, being the Arab country member of the Security Council, as well as the Secretary General of the League of Arab States. The meeting examines the latest developments on the Palestinian scene, the means to achieve a de-escalation of the situation in Al-Quds and in the esplanade of the Al-Aqsa Mosque, as well as the repercussions of these developments and the clashes between the Palestinian and Israeli sides. Participants will also discuss the means to put an end to the practices targeting the Arab, Islamic and Christian identity of the Holy City. This meeting is the fourth of its kind held by the Committee established last year by the Ministerial Council of the Arab League. The latest meeting took place last September in Cairo, on the sidelines of the 157th session of the Council of the Arab League at the ministerial level.